Nationwide Opens Branch in Glastonbury A Year After All Banks Closed 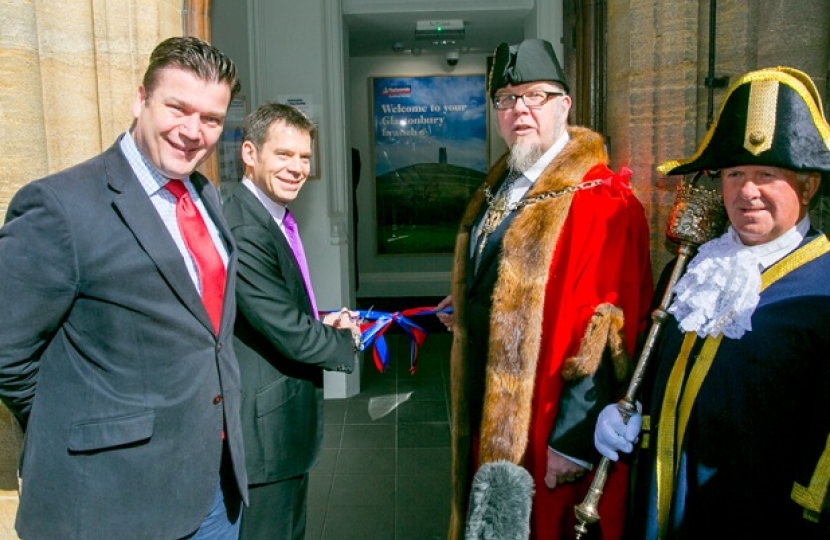 After a year without banks, today (April 27) was the official opening ceremony of the Nationwide branch in Glastonbury.

The branch opened to the public on Tuesday (April 25) but today the Mayor Jon Cousins, his deputy Emma George, CEO of Nationwide Joe Garner, branch manager Phil Goodridge-Reynolds and local MP James Heappey came to cut the ribbon. After the official ribbon cutting ceremony, speeches continued on the High Street.

Mr Cousins said: "We had a lot of support from the community and an amazing thing happened: we got organised. James was fantastic at bringing it up at the Prime Minister's question time.

"This is an issue that is affecting the whole country."

He added: "When we got a call from a building society asking if we would like a branch here I realised it was a no-brainer. Of course we did!

"What has come to us is much better than a bank, it's a building society, a mutual society. Well done for Nationwide for stepping in where we had this gap."

The new branch is open on 3 High Street and will be open Tuesday to Friday from 10am to 5pm and on Saturday from 9am to 4pm. It is closed on Sunday and Monday.

Video can be viewed at http://www.somersetlive.co.uk/watch-as-nationwide-opens-its-branch-in-glastonbury-a-year-after-all-banks-closed-in-town/story-30299128-detail/story.html

James has championed the need to tackle climate change and chairs the cross-party group promoting renewable and sustainable energy As one of the biggest threats to our planet, it is important climate change is tackled - and that starts with the Government.