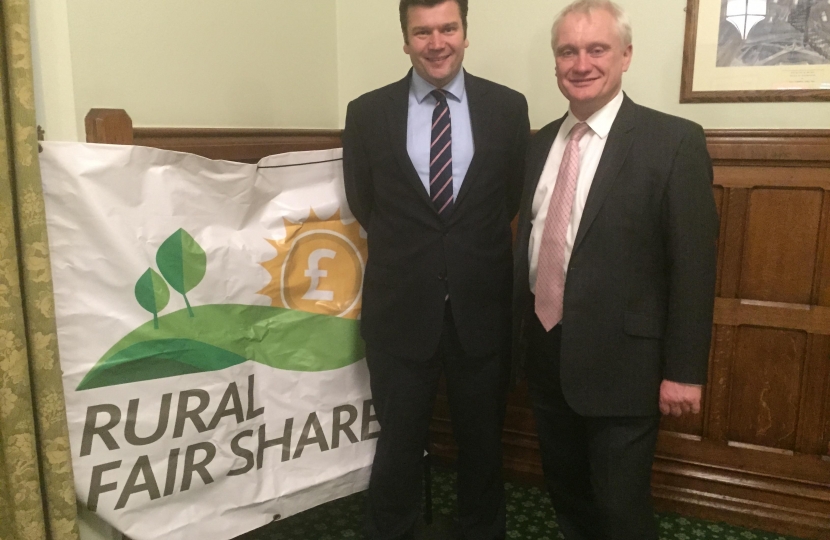 Funding for local government and public services in rural areas has been squeezed hard. Where those reductions have been at the same pace as in cities, the funding challenge is difficult but at least it is known that the deal is fair. However, too often rural areas are having funding cut more quickly; police forces, schools, health services, transport infrastructure, and local authorities are losing ground on their metropolitan counterparts and James says that’s just not fair. James knows government has difficult decisions to make but he will not be deterred from demanding a rural fair share.

Given the challenges faced in Somerset one would imagine that the funding formula would be set to close the gap. Sadly, that is not the case. Urban areas will lose about 21% of their funding in the next five years, but Somerset will lose 26%. As a proportion, the gap is widening not closing.

People in rural areas pay the same for mobile phones and internet connections as those who live in urban areas, yet get so much less, and travel further for our healthcare. Some appointments are inaccessible for those who rely on public transport. There are parts of the Wells constituency from which one cannot reach Taunton, Yeovil, Bath or Bristol for an out-patient appointment, or from which it is extraordinarily difficult to reach a GP surgery or health clinic. James has met constituents who allowed minor conditions to fester because they put off making the journey until it became sufficiently urgent that they needed an ambulance to hospital. That cannot be right.

James has also met young people in Somerset who allow the cost of public transport, or their inability to access a council-funded bus pass, to influence their decisions about the qualifications and education they seek post-16. It is ridiculous that they should limit their life chances because they cannot afford a bus pass to get to college to complete their A-levels, apprenticeship or something else.

Above all else, James is committed to ensuring that the gap will not widen on his watch. Sparsity ensures that the cost of doing things in places such as Somerset is more expensive than doing them elsewhere. As James has said, carers spend longer in their cars. School buses are required to carry more pupils over longer distances, which requires more fuel, and the same goes for rubbish and recycling trucks. Less can be done online because there simply is not the connectivity. Rural communities pay more in tax and receive less in Government spending, and all to achieve the minimum in local authority service provision. While he applauds the Somerset County Council for doing a very good job indeed, it is little wonder that things such as bus services, libraries, road improvements and myriad things besides—things that one would think of as essential to providing the grease for rural life—are coming to be seen as discretionary.

Our money must be spent more fairly and bridge the gap between rural and urban.