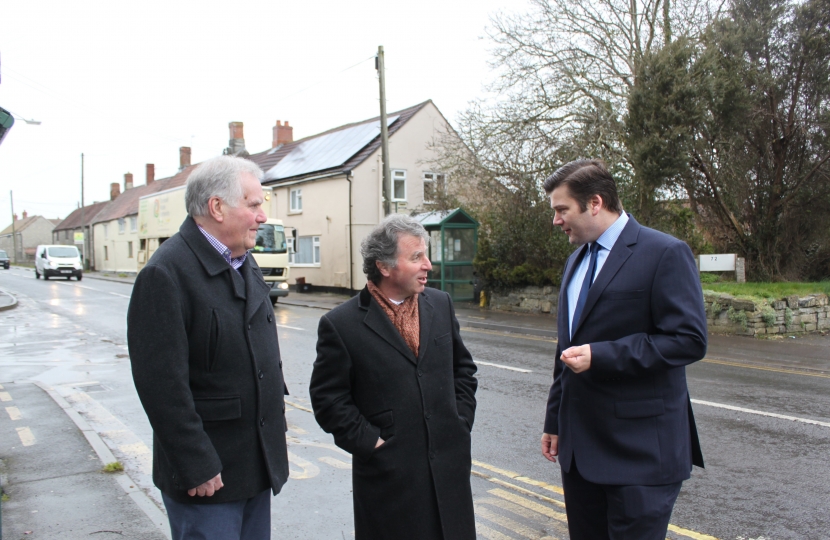 An expressway is needed at Ashcott and Walton to expedite traffic on A39 from M5/J23 into Glastonbury, Street, Shepton and Wells.

In all three places, James knows there are significant road safety concerns from local residents and he is grateful to the many people from Glastonbury and Walton who have engaged with him regularly on these.

During his past two years, he has been pitching to Ministers, the Local Enterprise Partnership and local authorities that the improvement of the A39 and A361 should be seen as an economic development project rather than simply to reduce traffic and improve road safety at the known pinch points. Bypassing Ashcott, Walton and Chilkwell Street in Glastonbury will allow traffic to move more quickly from the M5 into Glastonbury, Street, Wells and Shepton Mallet delivering a huge boost to the Mendip economy.

James is delighted that these expressways now feature in both the Mendip and Sedgemoor local plans and that the Local Enterprise Partnership (LEP), who are responsible for economic development in Devon and Somerset, have made this scheme one of their highest priorities. Mendip District Council have also made some money available for the early stages of the feasibility studies.

James has met with the leadership of Mendip, Sedgemoor and Somerset County Council and he has reported universal support for the scheme. James has subsequently met with the Roads Minister and the Chief Executive of our LEP at the Department for Transport to discuss a way forward. The first priority is to fully fund the necessary feasibility studies and the department are looking at whether this can be done through the new National Productivity Fund. The LEP will also pursue this funding through their routine bids to the Government’s ‘Growth Deals’ and other infrastructure improvement funds.

These things do not happen overnight and James suspects it will take a number of years for feasibility studies to be completed and for the project to progress. No discussion whatsoever has yet been held on the possible routes that these bypasses might take. However, he hopes you will be as pleased as he is that through James' campaigning, the need for these improvements is well understood in Westminster and they are now a priority in our regional growth plan.