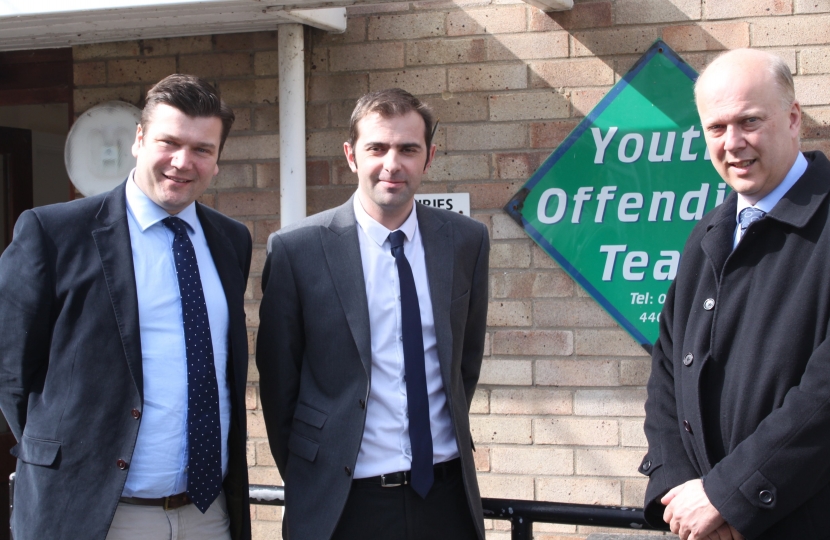 James Heappey, the prospective Conservative MP for the Wells constituency, accompanied the Justice Secretary Chris Grayling in a visit to Street – to see the work of the Somerset Youth Offending Service in tackling crime.

The Youth Offending Team (‘YOT’) based at Street has also had particular success in reducing the rate of re-offending among children.

“It was great to welcome the Justice Secretary to Street for this ‘closed door’ meeting with the YOT, local volunteers and Bibic. Reductions in offending rates here in Somerset are to be celebrated but it is clear that there is still more that can be done, and I’m sure Chris found it useful to hear suggestions for improvement directly from the YOT and those who they have helped.

“I was struck by the incredible commitment shown by the case-workers and the volunteers who work with vulnerable young people locally. But it was the experiences of those who have been helped by the YOT that were most powerful. They were clear that their lives had been turned around by the support and encouragement they’d received from local support workers, and it was inspiring to hear about their ambitious career plans.”

“The drop in offending rates in Somerset speaks for itself, and I congratulate the Youth Offending Team and connected groups on that achievement. It was really useful to hear from such a wide range of people, and whilst it is reassuring that so many areas of policy are progressing well, it's clear we need to fully support people coming out of care, and continue to tackle the availability of drugs and legal 'highs'.”