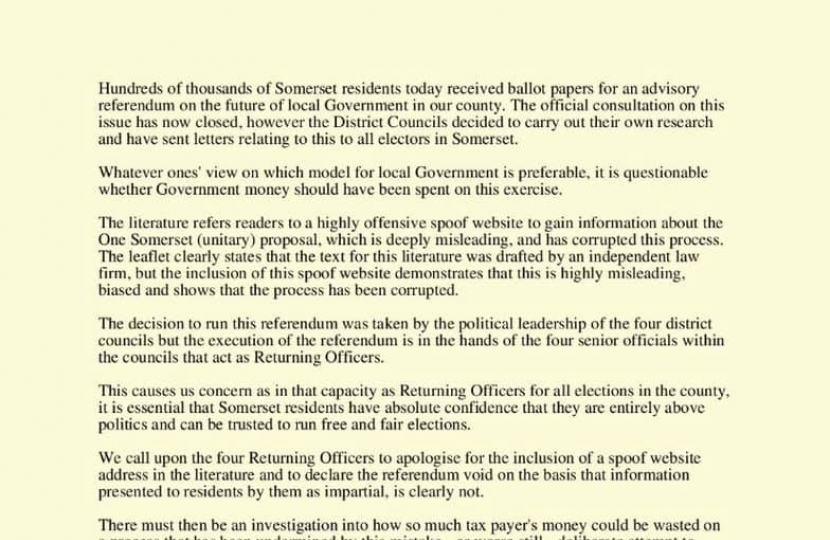 Below is a statement on behalf of myself, Marcus Fysh MP, Rebecca Pow MP and David Warburton MP.

Hundreds of thousands of Somerset residents today received ballot papers for an advisory referendum on the future of local Government in our county. The official consultation on this issue has now closed, however the District Councils decided to carry out their own research and have sent letters relating to this to all electors in Somerset.

Whatever ones’ view on which model for local Government is preferable, it is questionable whether Government money should have been spent on this exercise.

The literature refers readers to a highly offensive spoof website to gain information about the One Somerset (unitary) proposal, which is deeply misleading, and has corrupted this process. The leaflet clearly states that the text for this literature was drafted by an independent law firm, but the inclusion of this spoof website demonstrates that this is highly misleading, biased and shows that the process has been corrupted.

The decision to run this referendum was taken by the political leadership of the four district councils but the execution of the referendum is in the hands of the four senior officials within the councils that act as Returning Officers.

This causes us concern as in that capacity as Returning Officers for all elections in the county, it is essential that Somerset residents have absolute confidence that they are entirely above politics and can be trusted to run free and fair elections.

We call upon the four Returning Officers to apologise for the inclusion of a spoof website address in the literature and to declare the referendum void on the basis that information presented to residents by them as impartial, is clearly not.

There must then be an investigation into how so much tax payers’ money could be wasted on a process that has been undermined by this mistake – or worse still – deliberate attempt to mislead the Somerset public.

We have made the Secretary of State for Housing, Communities and Local Government aware of our concerns over the corruption of this process and hope that if the accountable officers within the councils will not do the right thing and void this referendum, that he will.

It has been a tough week for everyone following the Prime Minister’s announcement that the planned full unlocking for June 21st will now be postponed until July 19th.