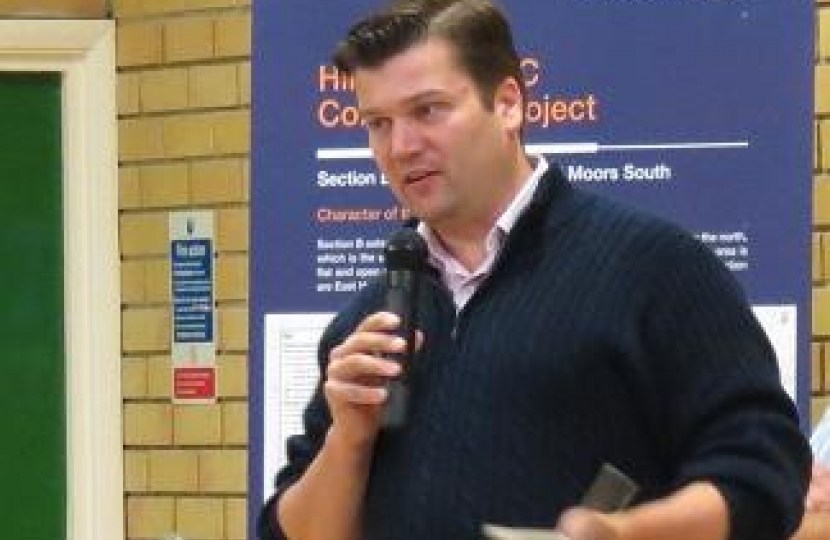 James Heappey has registered on the National Infrastrucuture Planning Portal as an Interested Party in the Hinkley Connection Project planning examination.  By registering, James will be able to attend public meetings, make submissions to the Planning Inspector and will be kept up to date on all that is happening.

If you've not yet registered, please do so here.

My objections to the plans proposed for the Hinkley Connection Project fall into four key areas:

I have been dissatisfied with the consultation process.  Undoubtedly, National Grid have done all that they should in terms of the meetings offered and they have produced a prodigious amount of literature too but that literature has often presented decisions as being limited between two options - “it is either the traditional trellis pylons or T pylons” - or it has obfuscated in the way that some options have been described; the T pylons were, for example, described in relation to the proposed new pylons without mentioning that they are significantly bigger than the existing pylons that run through the area – a far more accessible reference for local people.

Moreover, I have been concerned throughout that the consultation process seemed to be geared around where individual pylons would be sited indicating, therefore, that National Grid’s starting point was that there would be a pylon line of some description through our part of Somerset.  This has been hotly contested locally where I and many other residents have felt that serious consideration has not been given to underground or undersea options.

In the public meetings a number of residents asked detailed questions about the health risks associated with such high voltage lines.  Particular concerns were raised about the point at which the lines go underground and the proximity of this to nearby housing.  I felt that the answers given on the health risk associated with these lines was poorly articulated and I remain uncertain over whether there is any danger.  I hope that the Planning Inspectorate will make this a key area for examination.

This is a significant construction project and the A38 is already a very busy road.  It is also a road that is set to be put under increased pressure as it will be required to convey aggregate from the Mendip quarries to the Hinkley C building site as well as facilitating the building of the second Cheddar reservoir.  Traffic alleviation was discussed in the public meetings and it is clear that National Grid have given their movements an appropriate level of thought.  However, it is surely incumbent on National Grid, Bristol Water and the contractors at Hinkley C to advance a joined up strategy for alleviating pressure on the A38.  The affect on local quality of life and our economy will be profound if the A38 becomes a permanent traffic jam.

My prime objection, however, is the sheer devastation that this project will bring to our landscape.  Whichever pylons are employed they will tower over everything and will be highly visible on such a flat landscape.  People are obviously upset about the impact these pylons will have on their own properties and I sympathise with them but my wider concern is the impact they will have on the tourist industry that is so vital to our local economy.

As people enter Somerset on the M5, they will be greeted by this highly visible pylon line scarring the Levels and destroying the view to and from Brent Knoll.  The Planning Inspectorate has recently – and quite rightly – turned down an application for a wind farm in the area because of the impact it would have on visual amenity.  Both the trellis and ‘T’ pylons are far more intrusive than those wind turbines so one would hope that the same logic can be applied in consideration of National Grid’s application.